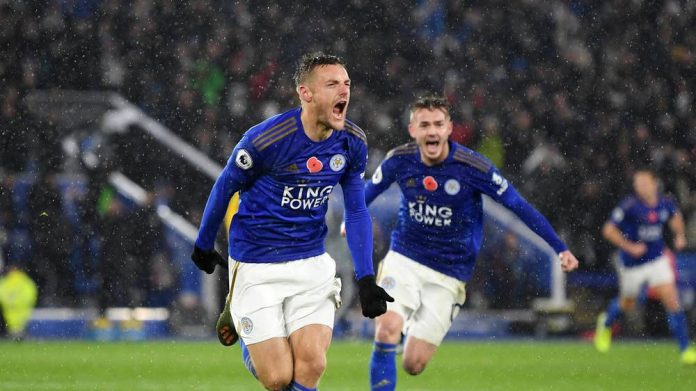 The Gunners looked on course for a fifth successive victory to maintain their outside chances of a place in Europe’s elite competition next season at the expense of Leicester’s similar ambitions after Pierre-Emerick Aubameyang swept in his 20th league goal of the season in the first half.

Leicester keeper Kasper Schmeichel kept Arsenal at bay with a string of fine saves before the interval, twice denying Alexandre Lacazette as well as Bukayo Saka – and it proved to be a vital contribution.

Arsenal were reduced to 10 men with 15 minutes left when Eddie Nketiah was sent off just four minutes after coming on as substitute for a high challenge on James Justin, and Leicester cashed in on their numerical advantage when Vardy slid home Demarai Gray’s cross in the 84th minute, the goal finally awarded after a lengthy VAR check for offside.

It was Vardy’s 22nd league goal of the season and restored his two-goal advantage over Aubameyang at the top of the Premier League scoring charts.

Leicester drop to fourth place, four points ahead of Manchester United having played a game more, but this was an important point that left Arsenal frustrated in seventh.

The Foxes have been in indifferent form since the league restarted and Rodgers will have been desperate to maintain momentum after a 3-0 victory over Crystal Palace last time out.

For long spells it looked like they would leave north London empty-handed, especially when they were relying on Schmeichel to stop them falling even further behind as Arsenal took control after going ahead.

Inevitably it was Vardy, who joined the Premier League’s ‘100 Club’ after scoring twice against Palace, who was the scourge of Arsenal once more as he pounced for his 10th career goal against them, although there was an agonising wait before he and Leicester could celebrate.