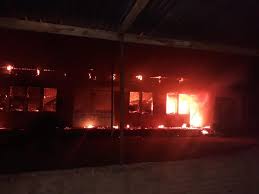 Balaka district hospital was consumed by fire last night, a development that has raised eyebrows  on the performance of Malawi’s fire fighting service.

When the horrible event was heightening, fire brigade was no where to be seen. It took eye witnesses’ bravery to fight the inferno which posed a threat to lives of patients.

Writing on his Facebook page one of the eye witnesses, former legislator for Balaka North who is also a musician Lucius Banda said they called the nearest fire brigade which is in Zomba but to no avail.

He also commended the effort made by people in defeating the fire in absence of the relevant authority. With reference to the Facebook post in question, the people managed to rescue 146 patients who escaped injuries and death.

It is an undisputed fact in Malawi that the fire brigade performs below par. Whenever an incident of fire occurs, people use their own means to stop the ugly events.

The relevant authority fails to show up at the scenes either due to lack of water or fuel. Malawians now take it normal when the fire brigade shows up late or does not show up at all when such happenings occur.