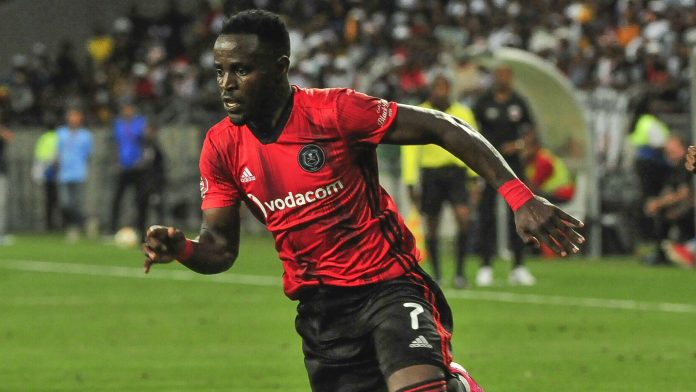 Malawi national football team red-hot striker Frank Gabadinho Mhango has said he will not get carried away by rumours linking him to European clubs.

According to reports, the Orlando Pirates hit man could leave the Soweto giants sooner than expected following growing interest from clubs in France and other European countries.

Reacting to the rumours, the former Nyasa Big Bullets, Bloemfontein Celtic, Bidvest Wits and Golden Arrows striker, said his focus is on Orlando Pirates for now.

He added that if the opportunity for him to ply his trade oversees shows up, he will seize it wholeheartedly. Gaba is topping the goal scorers list in South Africa`s Premier Soccer League with 14 goals.

The 27 year old enjoyed his great form before the league was suspended due to coronavirus pandemic. He is expected to pick up from where he stopped when the rainbow nation`s top flight league resumes.

His sparkling form forced his former coach at Bidvest Wits Garvin Hunt to regret selling him to the Buccaneers. Gaba is also an asset for Malawi national football team the Flames, with a couple of goals to his name.