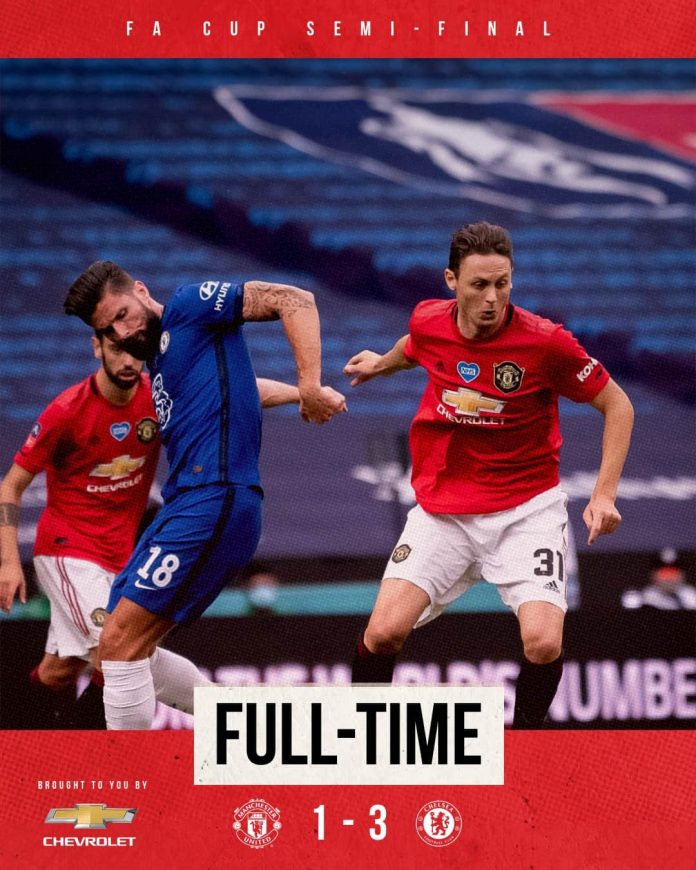 De Gea made a flimsy attempt to deal with Olivier Giroud’s flick in first-half stoppage time then weakly fumbled Mason Mount’s tame 20-yard shot into the net moments after the restart.

Chelsea’s excellent performance fully merited this victory and United’s abject misery after a dreadful performance was complete when captain Harry Maguire diverted Marcos Alonso’s cross into his own net at the near post with 16 minutes left.

Frank Lampard’s side were in complete control from first to last as they comprehensively ended Manchester United’s 19-match unbeaten run in all competitions.

Bruno Fernandes pulled a goal back from the penalty spot late on after Callum Hudson-Odoi fouled Anthony Martial but it could not even be described as a consolation as Chelsea closed out the win.

Once again 33-year-old Giroud demonstrated his influence, leading the line selflessly and being rewarded with that crucial first goal, even though it received a large helping hand from De Gea.

Chelsea were more energetic, dangerous and aggressive and while they were thankful to those mistakes from De Gea, the margin of victory was no more than they deserved.

Lampard’s side cut off any supply line to United’s forwards and it will be an intriguing final on 1 August back here at Wembley, when he pits his wits against another rookie manager in Arsenal’s Mikel Arteta.

United went into this semi-final high on optimism on that long unbeaten run and with the sense that Solskjaer was starting to get to grips with the big rebuilding job.

That continues and United are still in decent shape to reach next season’s Champions League, either via the Premier League or Europa League, but this was a savage setback.

And the main culprit was De Gea, who gives the impression of a goalkeeper either in permanent decline or going through a very long slump.

De Gea changed the face of this FA Cup semi-final with those mistakes, allowing Chelsea to transform their dominance into a two-goal lead.

Fernandes was overpowered in midfield and United had no punch in attack, where Solskjaer decided to leave the potency of Anthony Martial and Mason Greenwood on the bench, along with Paul Pogba.

It was perhaps a sign that Solskjaer knew all was not well when he introduced Martial for defender Eric Bailly when he sustained a first-half head injury while Greenwood and Pogba were only introduced in desperation when the game was gone.

Bailly suffered a cut to the back of his head and Solskjaer said the Ivorian had been taken to hospital for “routine checks and protocols”.

In defence they were also vulnerable, Victor Lindelof losing Giroud too easily for Chelsea’s opener and captain Maguire ending any hopes with that own goal.

United complained they should have had a penalty when Martial went down under Kurt Zouma’s first-half challenge but this was a miserable experience for Solskjaer and his players.

Solskjaer’s side have had many good days in recent months. This was a very bad one.