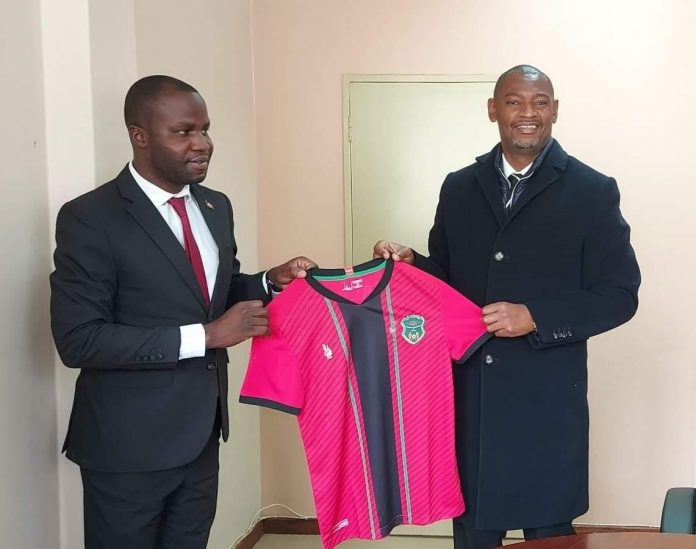 He had a meeting with FAM officials led by President Walter Nyamilandu Manda. New Sports Minister said was ready to work with FAM to rebuild Flames and the new government’s wish is to see the Flames start doing well in international competitions.

“This is the first time I am visiting the Mpira Village and I am impressed with the composition of the facility, the FA set up and the vision that the administrators have in moving the game forward.

“What is remaining is for us to translate the vision into fruits which is the National Team’s performance in international competitions because that is what people will use to assess us.

“Government will always be there to support FA in achieving this dream by among other things honouring budgetary allocations to the association,” he said.

FAM President Walter Nyamilandu said his administration is committed to work hand in hand with the ministry in developing the game.

“As an association, we know that the new government has an agenda to transform every sector of this country and we would like that transformation to come into football as well and I am sure the Minister is the right man who will help us change the mentality of seeing football as a social enterprise but rather a commercial one.

However Msungama had expressed his disappointment with Nyamilandu’s involvement in politics. He further said that Nyamilandu should know better that his position demands that he should be non political.

“The minister is so energetic and passionate to change the game and we are sure that he will support us in this battle that we have been fighting for a long time,” said Nyamilandu.

Before visiting FAM, the Minister toured the Malawi National Council of Sports Offices at Chichiri.

Nyamilandu told the media that “let’s look ahead and develop the sport.”

At the end of the meeting, the FAM President represented a Flames replica Jersey to the new sports minister.