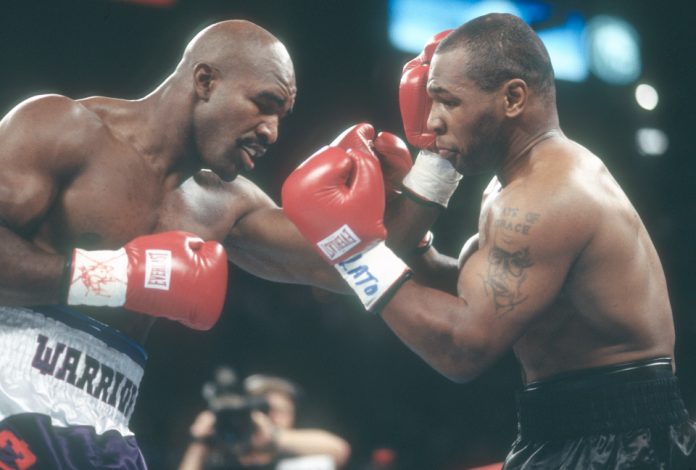 The former heavyweight champion, 53, is considering a return to the ring and gave a nod to his fans on social media.

The American flexed his arm and unleashed a dynamic barrage of punches in front of the camera.

However, the video was cut short when a fluffy white dog jumped up at him next to a swimming pool.

A third confrontation with Evander Holyfield has been talked about as Tyson’s comeback bout – their last fight seeing Iron Mike biting a chunk off his opponent’s ear in their 1997 rematch.

Tyson’s potential comeback has got the boxing world talking and while the likes of Dave Allen are against his return and former heavyweight David Haye has no qualms with a potential Tyson vs Holyfield third fight. He further said “Mike Tyson and Evander Holyfield had two great fights, Holyfield came off best both times and I expect the same thing to happen again”.

What’s the worst that can happen? One of them gets knocked out. ell, they’ve spent their whole lives doing that anyway.

“As long as everyone’s healthy to get in there and do it, crack on. What else are you gonna do?”

Shannon Briggs, 48, is another tipped opponent to fight Tyson.