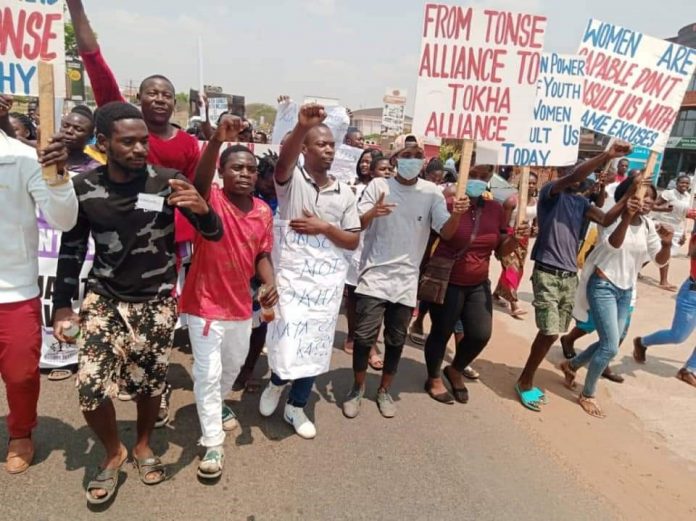 Women in Malawi took to the streets earlier today to demonstrate against gender inbalance in public offices but Alas! Only a few showed up.

The demonstrations were motivated by gender inbalance in public appointments being made by President Lazarus Chakwera. According to activists, women are getting a raw deal on the appointments in question.

The streets of Blantyre and Lilongwe only accommodated a handful people. Among those few people were a countable men who felt the need to join women in the fight for their rights.

Chakwera recently appointed board chairpersons for statutory cooperations and only a few women made the cut. Prior to that he appointed members a cabinet which also has low representation of women.

Speaking to the press during his 100th day commemoration in office, the Malawi leader said that he is concerned with promoting women. However he said that it will take time as gender balance cannot be achieved overnight.

The president also attracted critics when he said names of qualified women should be submitted to his office for possible appointments. Commentators said the leader was admitting that he does not know qualified women in the country which is not good for the father of a nation.

Other citizens have also expressed disappointments with the ongoing new appointments by the president, saying that besides the gender inbalances, the majority of the appointments are just “tokens of appriciation”. They said that most of the newly appointees had played various roles during the campaign period and the president is now paying them back.

One social media commentator Patrick Soko said, “if this style of appointments continue in the next five years then as a country we have only changed the government officials but technically nothing has changed in terms of improving the same old way of doing things”.