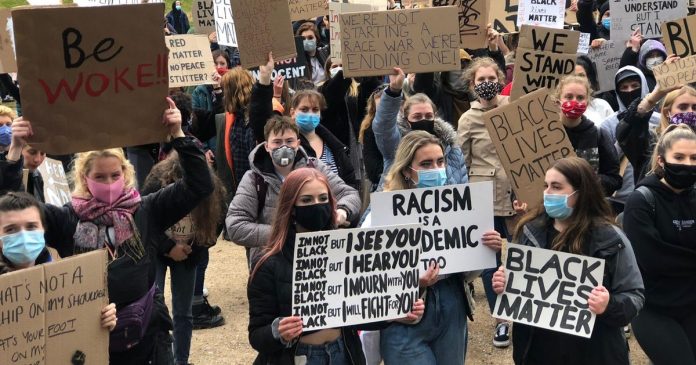 Thousands of people have joined a protest in London over the death of African-American George Floyd in US police custody nine days ago.

It comes as UK chief constables said they stand alongside all those “appalled and horrified” by his death.

In a joint statement, they said the right to lawful protest was a “key part of any democracy”.

But they stressed coronavirus restrictions, including not gathering in groups of more than six, remained.

Protests began in the US after a video showed Mr Floyd, 46, being arrested on 25 May in Minneapolis and a white police officer continuing to kneel on his neck even after he pleaded that he could not breathe.

Prime Minister Boris Johnson said on Wednesday that Mr Floyd’s death had been “appalling” and “inexcusable”, but was criticised for failing to comment on the killing before now.

SNP Westminster leader Ian Blackford said the UK government had “shuttered itself in the hope no-one would notice”.

Meanwhile, Labour leader Sir Keir Starmer called on the PM to convey to US President Donald Trump the UK’s “abhorrence about his response to the events”.

Speaking later when asked about it at Wednesday’s coronavirus briefing, Mr Johnson said: “My message to President Trump, to everybody in the United States from the UK is that… racism, racist violence has no place in our society.”

He said people had the right to protest but “I would urge people to protest peacefully, and in accordance with the rules on social distancing”.

The officer, Derek Chauvin, has been charged with third-degree murder.

Demonstrators gathered in London’s Hyde Park for the protest organised by campaign group Black Lives Matter, before marching south through the city.

It followed days of protests in US cities including Washington DC, Los Angeles, Houston and Seattle, after the Floyd case reignited deep-seated anger over police killings of black Americans and racism.

Tens of thousands of demonstrators have taken to the streets there – not only to express their outrage at the treatment of Mr Floyd – but to condemn police brutality against black Americans more widely.
In the UK protesters marched to Victoria Station, where they hung a sign reading “justice for Belly Mujinga” – referring to a railway worker who died with Covid-19 after being spat at while at work.

They then continued towards Westminster, where protesters blocked the roads outside Parliament.

A number of videos shared on social media showed protesters and police clashing outside Downing Street.

Footage showed objects, including signs and a traffic cone, being thrown at police, while one protester was wrestled to the ground and restrained by officers.