Home Politics DPP spits venom on Tonse government and challenge it to call for... 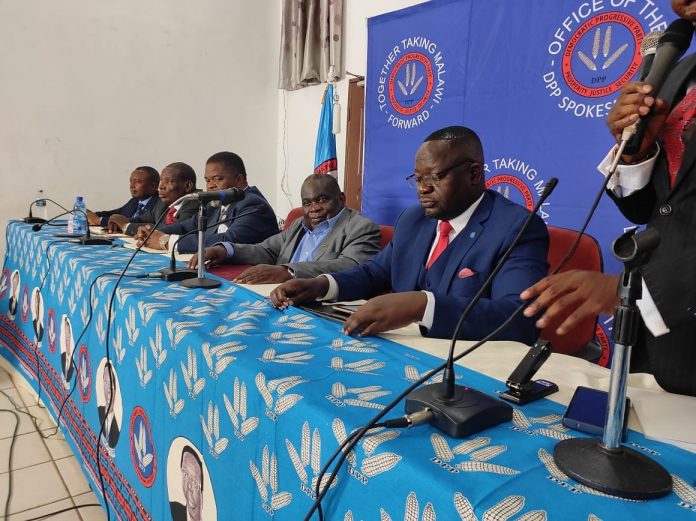 The Democratic Progressive Party (DPP) top officials have today challenged the Tonse Alliance Government to call for a referendum to weigh out if Malawians still have hope in its leadership. DPP believes that Dr Lazarus Chakwera’s administration has failed to govern the country following the economic crisis the country is currently facing.

DPP had called for a press briefing in Lilongwe where the party assembled it’s top brass personnel to tackle the issues that the country is experiencing due to what it called “indecisive leadership” by Dr Chakwera. First to address the media was the DPP’s Presidential Spokesperson Shadreck Namalomba who said Dr Chakwera’s leadership has failed to deliver its promises, therefore, Malawians have lost trust and he challenged the government to call for a referendum.”At this stage, I advise the Tonse government to hold a referendum to hear people’s views on how you are running the affairs,” he said.

Former Minister of Finance Goodall Gondwe took a swipe at President Chakwera’s administration for spending extravagantly at a very crucial time the country is running short of foreign currency. “The essence of leadership is to enhance people’s welfare but this government has failed. The President is busy spending the meagre resources in dollars and at the same time, he preaches cost-cutting measures. He was shocked to learn that the president had chartered a plane on his recent trip to Switzerland which costs tax payers $10,000 per hour. That’s why we are calling for a referendum for the people to assess his popularity,” said Gondwe.

DPP President for the Eastern Region Bright Msaka took time to remind Malawians of the enticing promises made by the Tonse Alliance government that have not yet been fulfilled. For example, the Former Justice and Constitutional Affairs Minister said it was embarrassing in Parliament for Minister of Agriculture Lobin Lowe to advise farmers to buy two bags of manure fertilizer after the government failed to deliver the required fertilizers to the farmers in time. “They promised several things and have failed to implement them. Instead, they are busy convincing people that they have delivered. We in the DPP believe that development is felt by the people themselves without coercing or forcing them to believe.”

In his remarks, one of the country’s economic gurus, Dr Dalitso Kabambe said the country is in the current economic tangle due to what he described as poor economic policies on the fiscal and monetary sides by the Chakwera administration. Dr Kabambe who is also the former Reserve Bank Governor and during his tenure in office the country enjoyed single-digit inflation among other economic benefits, also accused the Tonse Alliance leadership of overspending. “This government has failed to put the right economic policies to sustain our economy.

Kabambe further said that Malawians are suffering today because the current leadership has messed up and it has no clue on how to turn around things. Since the Tonse Alliance took over power from the DPP through a court-sanctioned fresh Presidential election in June 2020 the country’s economy has been on a free fall. The citizens have seen the increased prices of almost all of the basic commodities on the domestic market. To add more misery to the already fragile economy, the country’s currency the Kwacha has been devalued by 25 per cent. These are some of the several factors that the Democratic Progressive Party has challenged the Tonse Alliance Government to call for a referendum to measure its popularity.